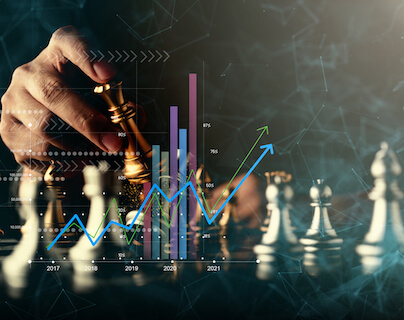 Use the golden cross to increase your returns

Knowing exactly when to buy or sell is not easy BUT here is something that can help you – it is called the golden cross and the death cross - and it can help if you are a trader or a long term investor.

What is a golden cross?

This indicates an increasing stock price and often results in higher trading volumes.

Opposite is a death cross

This pattern is called a death cross, and shows you that the stock price is falling and may continue falling. 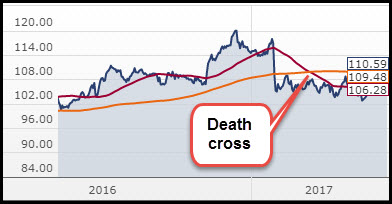 To understand exactly how a golden cross or death cross can help you, it is important that you know what a moving average is.

What is a moving average?

A moving average is an indicator used to reduce the noise of daily stock price movements.

It is simply the average closing price of a stock measured over a number of trading days, typically 50 days, 100 days and 200 days.

For example, to calculate the 50 day moving average you simply average the closing price of the stock over the past 50 trading days into a single value or data point.

Moving averages thus lag behind the current share price since it is based on past data. The longer the time period used to calculate a moving average, the greater the lag.

It shows you the trend

So when the short term average moves up and passes over the longer term moving average (golden cross), it shows you that there is an upward moving trend in the share price.

How to use the golden cross

1. The golden cross is a good indicator to use to buy stocks

The golden cross is a great indicator to help you decide when to buy. Once you have done your research and decided to buy a company you can use a golden cross to help time your purchase.

Research has shown that the golden cross is best used for larger and more stable companies and does not work as well for smaller (more volatile) companies.

For individual stocks longer period moving averages, for example 50 day and 200 day, provide a better signal than a moving average for a shorter period.

Indicators available in the stock screener

There are a couple of indicators available in the screener which allow you to use the golden and death cross to buy and sell at the right time.

For individual companies, the typical golden and death cross of 50 day and 200 day moving averages is available.

In the Quant Investing stock screener the golden cross it is called Cross SMA 50/200 (SMA = Simple Moving Average) and is calculated as follows:

What do the values mean?

This is how you can use one of the four funnels to select companies golden cross companies using the screener:

How to select golden cross companies

How to select golden cross companies

You can of course also see the golden cross values of the companies in your screen.

To do this click on the Choose columns button and select Cross SMA 50/200 as one of your output columns.

How to sort the column

As a subscriber you also have access to golden cross indicators applied to 42 world stock markets and 43 ETF’s.

These two reports allow you to quickly see what the major market and market sectors are doing.

Here is an extract of both reports (updated weekly):

More information about the market dashboards

You can read more about the dashboards here:

How will you know when the market turns?

In both the world stock exchange and the ETF momentum dashboard, there are a few golden cross indicators you can use.

The indicators tell you which markets or ETF’s have had a golden cross or death cross recently. All you need to do is look at the ratio of the short term moving average to the long term moving average as shown in the last four columns of both reports.

The following golden cross indicators are included in both reports:

In the above reports we use an 8 day moving average as the short term indicator. This shorter time period will be more sensitive to price changes, thus giving you a short term golden cross (or death cross) indicator.

What the values mean

Values of slightly more and less than one show you that a golden or death cross has most likely taken place recently.

The golden cross and death cross are simple and easy to use indicators to help you time your buy and sell decisions – especially if you are more of a trader.

That said it can also help you if you are a long term investors as it can help you time your buy and sell decisions better.

For example, buy an already researched investment idea on a golden cross and wait for the price to turn up again after a death cross before buying.

PS To get the golden cross and more than 110 other ratios and indicators to help you make better investment decisions join now.

Why not do it now while it is still fresh in your mind.