Does the Magic Formula also work in Finland?

The Magic Formula investment strategy was able to outperform the Finnish stock market with less risk over the 13 year period from May 1997 to May 2010. The back test also discovered something unusual that can increase your Magic Formula returns even more.

Joel Greenblatt proved that his Magic Formula investment strategy works in the US markets.

Magic formula works in the Benelux

And Pim Postma in his 2015 Bachelor thesis Magic Formula Investing in the Benelux proved that the Magic Formula also works in the Benelux (Belgium, Luxembourg and the Netherlands) stock markets where it was able to realise an average 7.70% annual market outperformance without taking additional risk during the 20 year period from 1995 to 2014.

You can read more in the article Does the Magic Formula also work in Belgium, Luxembourg and the Netherlands?

Does it work in Finland?

But does the Magic Formula also work when applied to companies listed in Finland? 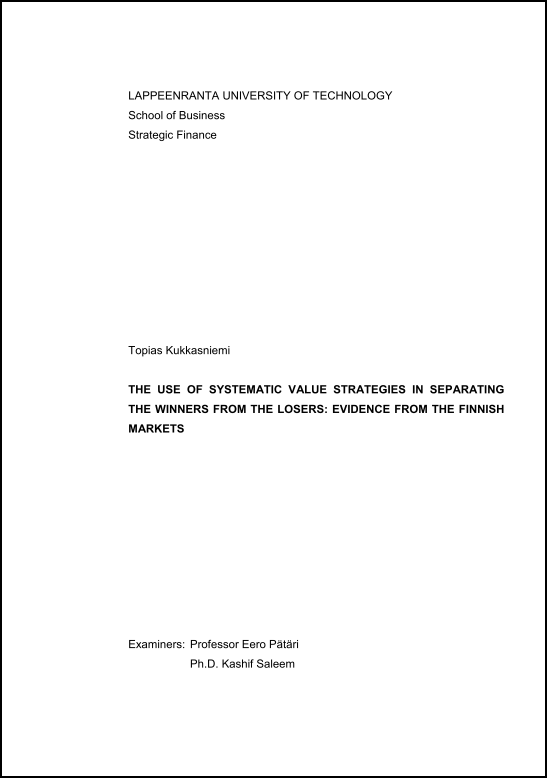 It does, and it was proved in 2013 by Topias Kukkasniemi in his 68 page master’s thesis The Use of Systematic Value Strategies in Separating The Winners From The Losers: Evidence From The Finnish Markets  at the Lappeenranta University of Technology in Finland.

He tested the Magic Formula on the Finnish stock market over the 13 period from May 1997 to May 2010 and found that the strategy outperforms the market.

But he also made a counter-intuitive discovery that can increase your return from the Magic Formula which you will find interesting so keep reading.

Tested the Magic Formula and other strategies incl. ERP5

Topias not only tested the Magic Formula but also the ERP5 investment strategy (that performs even better than the Magic Formula) developed by Philip Vanstraceele and Luc Allaeys, two good friends of mine.

You can read more about the ERP5 investment strategy here: A better alternative to the Magic Formula?

In this article I am going to focus on his testing of the Magic Formula investment strategy.

This is what he found in his thesis:

"This study examines the Magic Formula and ERP5 value strategies in the Finnish stock market.

Magic  Formula  ranks  stocks  based  on  EV/EBIT and ROA and ERP5 based on EV/EBIT, ROA, P/B and five-year trailing ROA. The purpose of the study is to examine whether the value strategies can be used to generate excess returns over the market index.

The data has been collected from the Datastream database for the sample period from May 1997 to May 2010 and consists of the companies listed on the main list of Helsinki Stock Exchange.

This  study  confirms  the findings  of  previous  research  that  value  premium  exists  in  the  Finnish stock markets  and  that  systematic  value  strategies  can  be  used  to  form portfolios that outperform the market index with lower volatility."

Source: The  Use  of  Systematic  Value  Strategies  in  Separating The Winners From The Losers: Evidence From The Finnish Markets

In plain English he found that the Magic Formula investment strategy would have given you higher return than the overall Finnish stock market with less risk (wild up and down movements) over the 13 year test period.

What and how he tested

The data used in the thesis was from the Thomson Reuters Datastream database. If data was missing it was added from annual reports or company websites.

The number of companies in the back test universe ranged from 61 to 120 depending on the year. If a company has more than one series of shares listed, only the more liquid series is included in the sample.

As  suggested  by Joel Greenblatt  utility  stocks  were  excluded,  as  well  as  financials because  their  financial  statements  have  a  slightly  different  structure  and the  ratios  are  not  comparable  to  companies  operating  in  other  sectors, such as manufacturing.

How returns were calculated

Return calculations included dividends for both individual companies and the benchmark index.

He did not include taxes or transaction cost in the return calculations.

The time period tested in the study was the 13 years from 2 May 1997 to 2 May 2010. This is about equal to one business cycle. This gives you the chance to see how the strategy performs in up and down markets.

Equal weight portfolios (same amount invested in each company) were formed on the first trading day of May each year.

The portfolios were formed in May to minimize the risk of look ahead bias, as it takes a couple of months for the companies to publish their annual reports after their December year end.

The portfolios were held for a year until the first trading of May of the following year.

Testing the Magic Formula in Finland

He did this for two reasons:

ROA was calculated as follows: Earnings Before Interest and Taxes (EBIT) / Total Assets.

To test the strategies really thoroughly Topias divided companies into  four  categories (from best – Top 25% to worse – Bottom 25%)  based  on  their Magic Formula rankings.

This resulted in the following portfolios: 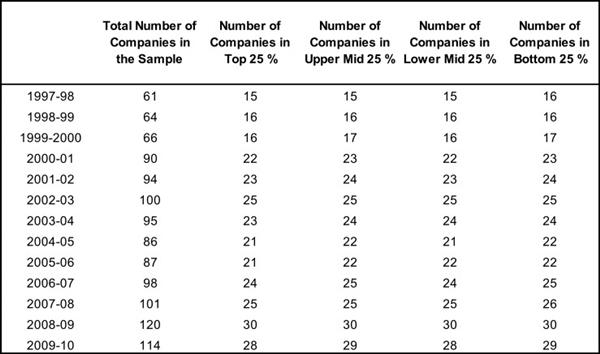 Now we come to the most important part – how well did the Magic Formula do in Finland?

As you can see the Magic Formula could definitely have helped you outperform the market.

Surprising finding - than increases your returns

But the surprising finding of the study is that the best ranked Magic Formula companies (MF Top 25%), thin blue line in chart above, did not perform the best.

You would have gotten better returns if you invested in the companies just below the top 25% of Magic Formula companies (MF Upper Mid 25%) the red line in the chart above.

Why is this, you may be thinking?

Topias speculated as to why it could be saying:

"A possible explanation for this could be that the stocks ranked in the top quartile are cheap for a reason and have only recently taken a turn to the worse so that the accounting ratios still look attractive although the business environment has changed.
For some reason, Magic Formula seems to put the biggest gainers in the second quarter."

Better returns if you do this

This is a very interesting insight and is not something we have tested.

We have however found that you can get even better returns if you combine the Magic Formula with companies that have good six month share price momentum (6 month Price Index).

Topias not only tested to see if the Magic Formula could give you higher than market returns but also if you could achieve the returns with less risk.

He defined risk as the volatility of Magic Formula returns compared to that of the market index. 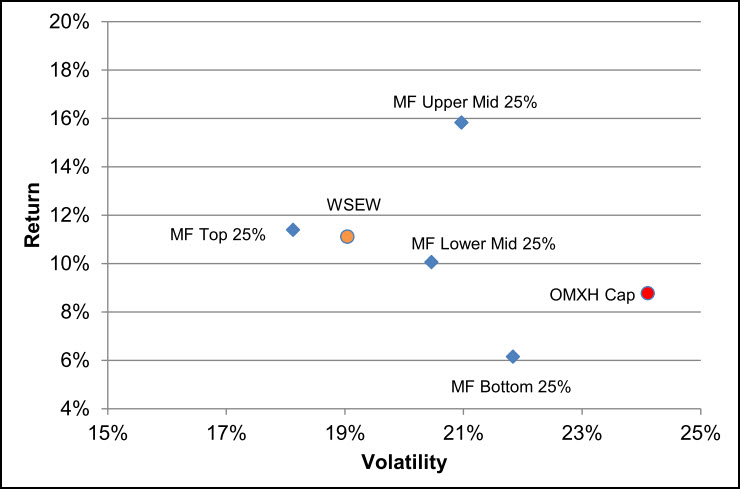 As you can see all the Magic Formula portfolios were less risky than the market index (OMXH).

The following table summarises risk and return numbers of the Magic Formula portfolios.

How you can get the Magic formula working in your portfolio

The Quant Investing screener already has everything you need to get the Magic Formula investment ideas for your portfolio.

How to select to best Magic Formula ranked companies

Once you have logged in simply select MF rank (Magic Formula ranking) as your primary screening factor.

You can combine this with any of the more than 110 other ratios and indicators the screener gives you. We have for example found that the Magic Formula can be very successfully combined with six month share price momentum. 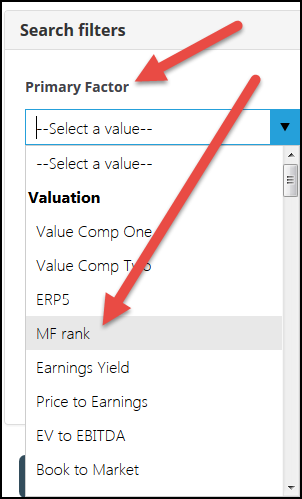 Then, using the slider, select the range of companies you want to select. In the image below the 20% of companies with the best Magic Formula ranking will be selected. 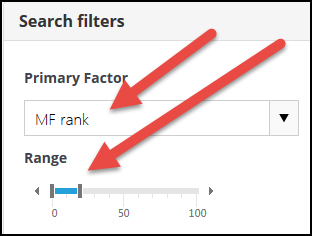 Select the countries you invest in

Your next step is to select the countries where you would like to invest. 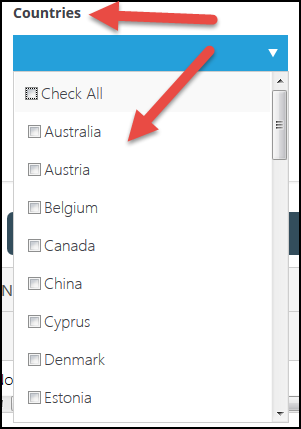 The last thing for you to do is select the minimum traded value and company size you want the screener to look for.

If you then click the Filter button the screener will give you a list of the best Magic Formula companies that meet all the above criteria you have selected.

PS To find Magic Formula investment ideas in the countries you invest in (for less than an inexpensive lunch for two) click here: Join today

These Magic Formula articles may also interest you:

Does the Magic Formula also work in Belgium, Luxembourg and the Netherlands?

How to get the best returns with Magic Formula investing