If so here is an idea you will find interesting.

What is Shareholder yield?

In the fourth edition of his book What Works on Wall Street James O’Shaughnessy set out to find a ratio better than dividend yield and came up with a ratio he called Shareholders Yield.

James calculated Shareholder Yield as the total amount of money returned to shareholders (not just dividends) in the form of:

Do you also prefer buybacks?

Provided a company's shares are undervalued I am sure you also prefer share buybacks to dividends.

You know dividends are subject to withholding taxes and to make it worse, here in Germany, are also taxed at a rate of 25%.

This means of the full dividend the company paid a relatively small amount lands in your (and my) account after taxes.

Share buybacks on the other hand are not subject to tax as they simply lower the company’s cash and number of shares outstanding, which means (if profits remain unchanged) the company’s earnings per share will increase.

And if the company’s price to earnings ratio remains unchanged its share price will increase.

This increase gives you a capital gain rather than a dividend that is highly taxed every time it is paid.

In the book What Works on Wall Street James tested the Shareholder Yield against the dividend yield over a period of 82 years between 1927 and 2009.

Over the 82 year period if you each year bought the 10% of companies with the highest dividend yield you would have earned a yearly average return of 11.77%.

If you did exactly the same but instead of dividend yield invested in the 10% of companies with the highest Shareholder Yield your annual return would have been 13.22%.

This is a HUGE improvement if you think that this higher return was earned over a period of 82 years.

In both cases your return would have been better than the 10.46% yearly return of the stock market overall.

Does it work in Europe?

We of course wanted to find out if Shareholder Yield is also a better ratio to use than dividend yield in Europe.

In a back test for the 12 year period from June 2001 to May 2013, if you used Shareholder Yield to find investments it would not have given you a higher return compared to if you only bought the highest dividend yield companies.

Over the 12 year period, if you each year invested in the 20% of companies with the highest dividend yield you would have earned a compound annual return of 9.95%.

Whereas if you invested in the highest Shareholder Yield companies your return would have been slightly lower at 9.94%.

Both strategies would have given you a better return that the 5.67% the market returned over the same period.

An even better ratio than Shareholder or Dividend Yield?

If you think of all the uses a company has for its free cash flow (cash from operations minus capital expenses) it can either:

What if you include debt repayments?

Mebane Faber came up with the idea to add debt repayments when calculating Shareholder Yield as you can argue that it is a form of returning money to shareholders as the company could have used that money to pay dividends or buy back shares.

As you can see the back tests show that Shareholder Yield (also including debt repayments) do not add a lot of value compared to using a simple investment strategy of only buying the highest dividend yield companies.

But this was only for a 13 year period.

Over longer periods of time the results may very likely confirm the results James found in What Works on Wall Street.

Get dividend investment ideas with a few clicks

Use one of the sliders to simply select Dividend Yield or Shareholder Yield from the drop down list. 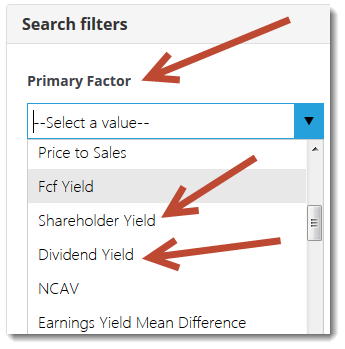 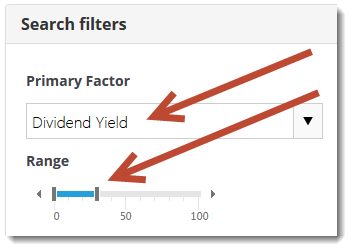 You can also use Mebane Faber’s definition of Shareholder Yield (including debt repayments) which can be selected as an output column of the screener (as well as the other ratios) as shown below: 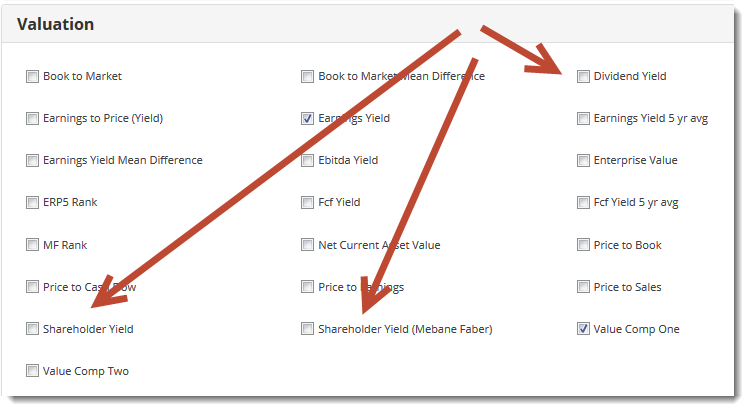 This is how the dividend investment ratios are defined in the screener:

Shareholder yield is the sum of the following: Dividend yield + Percentage of Shares Repurchased

For example if a company trading at €50 and pays an annual dividend of €1, its dividend yield (DY) is 2%.

If you add the two percentages together you get a Shareholder yield of 12%.

Note:  Shareholder Yield can also be negative as Percentage of Shares Repurchased can be negative if the number of shares outstanding increases.

Note:  Shareholder Yield (Mebane Faber) can also be negative as Percentage of Shares Repurchased and Net debt repaid yield can be negative if shares are issued and or debt increases.

PPS Is is so easy to get distracted, why not sigh up right away before you forget