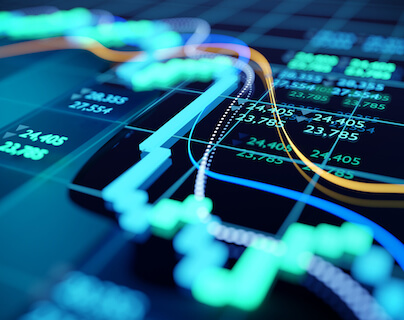 7 ratios to find the best companies to sell short

Do you sell stocks short? This article shows you a list of ratios and indicators that can help you find bad companies to sell short.

Do you sell stocks short? If you do this article shows you the best ratios and indicators you can use to find the best companies to short.

I also show you exactly how to use them with step by step instructions.

How many shares have been sold short?

Short Interest percentage (Short Int %) tells you how many of the company’s shares have already been sold short.

This information is only available for companies listed in the USA.

Short Interest Percentage Change (Short Int % Change) tells you what the change in the company’s shares sold short has been over the past quarter or three months.

This information is also only available for companies listed in the USA.

Where can you find it?

Both ratios can be used as a main screening factor in the Quant Investing stock screener. You can find them under the Quality heading as shown below. 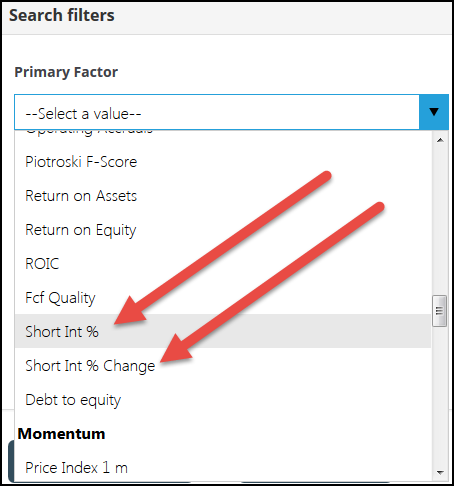 Both ratios can be found under the General Info heading as shown below. 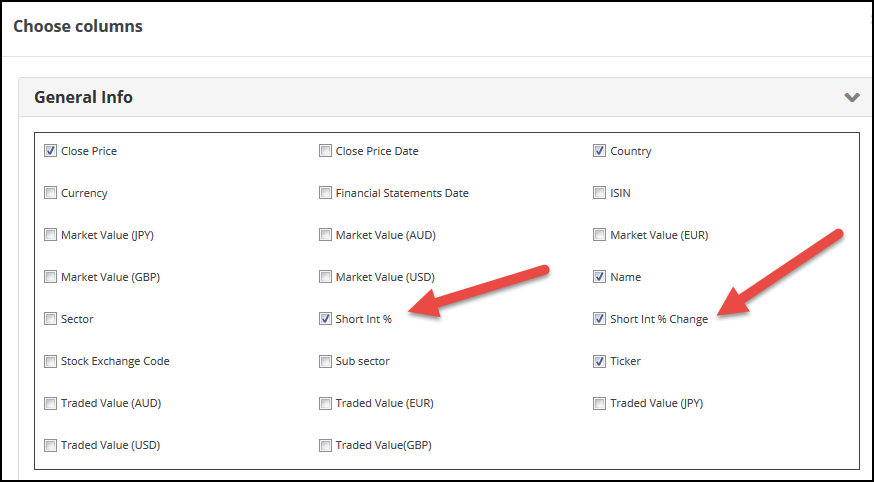 To select companies with the highest short interest use the low side of the slider.

This means setting the slider from 0% to 10% will give you a list of companies with the highest percentage of their shares sold short. 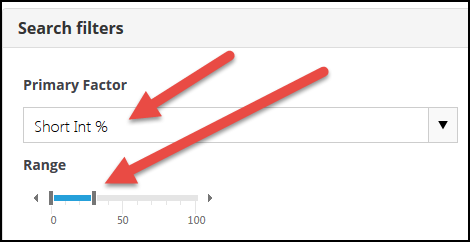 Or use the funnel

You can of course also use the column filter (the small funnel icon below the column heading) to select companies with high short interest. 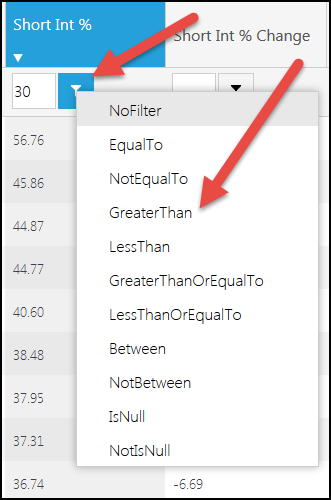 Remember short interest can also help you if you are a long only investor.

Short sellers are some of the best analysts out there, this means if a large percentage of the shares of a company you are thinking of buying has been sold short you must take another close look at your analysis.

Messod Beneish, an accounting professor at Indiana University's Kelley School of Business, outlined a quantitative approach to detecting financial statement manipulation in his 1999 paper “The Detection of Earnings Manipulation.”

He based his model on forensic accounting principles, calling it the “probability of manipulation”, “PROBM” model or the Beneish M-Score.

Does it detect manipulators?

In back tests the M-Score identified approximately half of the companies involved in earnings manipulation before they were discovered.

The M-Score can help your returns

In a back test the Beneish M-Score consistently improved stock returns from 1993 to 2007.

A M-Score score greater than -2.22 indicates a strong likelihood of a company being a manipulator.

Where to find it in the screener?

You can easily use the Beneish M-Score when looking for ideas in the screener.

Simply select M-Score (Beneish) as one of the output columns of your screen. You can then use the filter function (click the small funnel icon) to screen out companies with a bad Beneish M-Score. 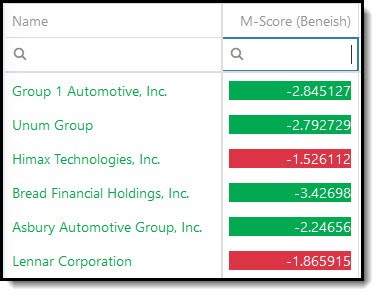 Find companies that may go bankrupt

The Altman Z-Score formula for predicting bankruptcy was published in 1968 by Edward I. Altman, who was, at the time, an Assistant Professor of Finance at New York University.

The formula can be used to predict the probability that a firm will go into bankruptcy within the next two years.

The Z-score uses a few income statement and balance sheet ratios to measure the financial health of a company. You can find more information on how the Altman Z-Score is calculated in the Glossary under the heading Z-Score.

How to interpret the Z-Score

The Z-Score values should be interpreted as follows:

The Altman Z-Score in the screener

You can easily use the Altman Z-Score in any of your favourite screens.

Simply select Altman Z-Score as one of the output columns of your screen. You can then use the filter function (click the funnel icon) to screen out companies with a bad Z-Score of less than 1.80.

In the screenshot below you can see that the Z-Score values are colour coded so you can easily see what is good (green), middle is (black) and distress (Red). 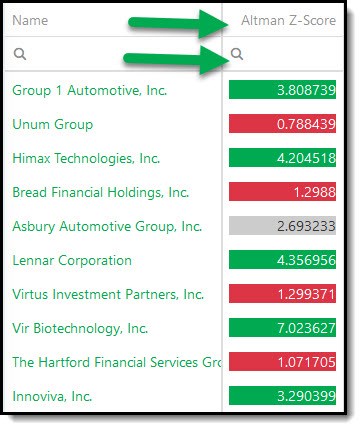 Can a company repay its debt?

The free cash flow (FCF) to long-term debt ratio indicates how long it will take a company to pay back its debt, given its current level of FCF generation.

The ratio thus gives you an indication of the financial health of the company.

To find companies to sell short you must look for companies with a weak FCF to debt ratio.

FCF to debt in the screener

You can use FCF to debt ration as one of the four filters in the screener. Under the heading Quality select Fcf to debt as shown below.

You can also use the column filter function to select only companies with a bad FCF to Debt ratio as shown below. 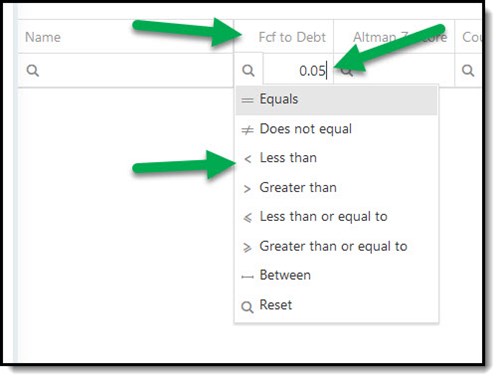 Are they cooking the books? – the C-Score

In June 2008 James Montier published a very interesting paper called Cooking the books, or, more sailing under the black flag.

He developed the C-Score to determine how many of six common earnings manipulating ratios a company is engaging in.

How is the C-Score calculated?

This is how the C-Score is calculated.

It has six inputs, each designed to identify a part of common earnings manipulation:

These six inputs are then simply added together. For example if a company has increasing DSI it receives a score of one.

James back tested the C-Score to determine if it really does have the ability to separate stocks which are likely to underperform.

He tested the C-Score over the 14 year period from 1993 to 2007 on the US and European markets with portfolios formed in June and held for one year.

US – Bad C-Score 8% worse than the market

In the US, stocks with high C-scores underperformed the market by around 8% per year generating a return of only 1.8% p.a. compared to the 10% p.a. the market returned over the same period.

In Europe, high C-score stocks underperform the market by around 5% per year compared to the 13% p.a. the market returned over the same period.

Don't use the C-Score alone

In the article James mentioned that the C-Score may be even more valuable if you combine it with a valuation ratio (to identify overvalued companies) as they are more likely to want to cook their books to maintain their “growth” status.

C-Score and price to sales

In a further back test James found that if you combine the C-Score with a price to sales ratio of more than 2 the value added by the C-Score increases substantially.

In the US this combination resulted in a negative return of 4% per year (with the median bad C-Score company losing 6% p.a. and 54% of stocks seeing negative returns).

In Europe, the combination of a high C-score and price to sales greater than 2 also generates a negative return of 4% per year (median bad C-Score company lost 10% p.a. and 57% of stocks had negative returns).

Where to find the C-Score in the stock screener

In the screener you can easily find companies with a high Montier C-Score (high chance of book cooking). 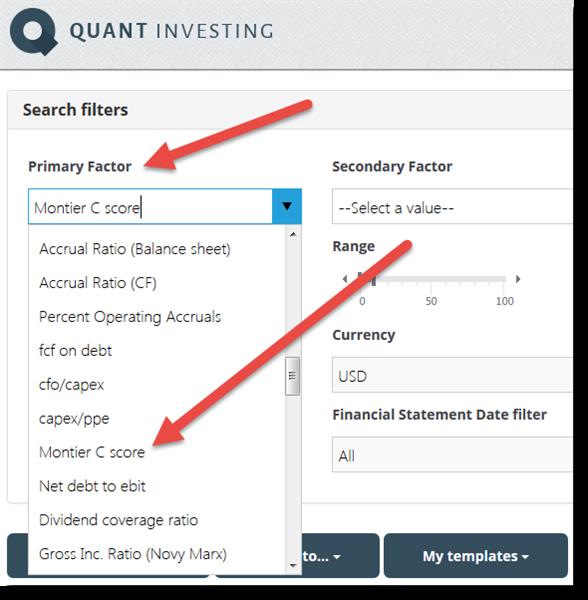 To select only high C-Score companies (book cooking companies) move the slider so to select companies from 60% to 100% as shown below. 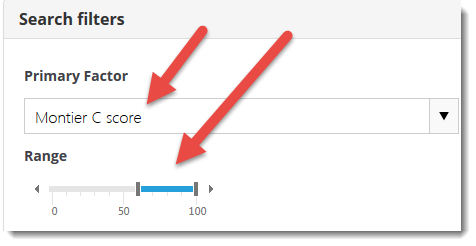 Use the Piotroski F-Score to find low quality companies

In the research paper Quantitative Value Investing in Europe: What Works for Achieving Alpha we tested the Piotroski F-Score on companies in the Eurozone over the 12-year period from 13 June 1999 to 13 June 2011.

In spite of the Piotroski F-Score being a quality indicator (it can’t tell you if a company is over or undervalued) if you used it as a single factor to select companies to sell short you would have done surprisingly well.

The following table shows you what your returns you could have earned if you used only the Piotroski F-Score to select investment ideas.

Take a look at the column Q5 in the table below. It shows the performance of companies with a Piotroski F-Score of 0 and 1, and as you can see small and mid sized companies performed terribly.

For all company sizes the companies with a low F-Score performed a lot worse than the market (large companies less so) which over the 12-year period returned 30.54 % or 2.25% per year, dividends included.

We did not test it but I am very sure if you use the Piotroski F-Score along with a valuation ratio like price to sales, (to include expensive companies that make losses), you will be able to identify even better companies to sell short.

Just the start of your process

As I always remind you these using these ratios should only be the first step to find out if a company is a good one to sell short.

But you already know this.

Glossary tells you everything

If you would like to see exactly how all the ratios or indicators are calculated simply go to the stock screener glossary page.

PS To immediately get all these ratios and indicators working in your portfolio click here: Screener sign-up

PPS Why not sign up right now while it's still fresh in your mind?