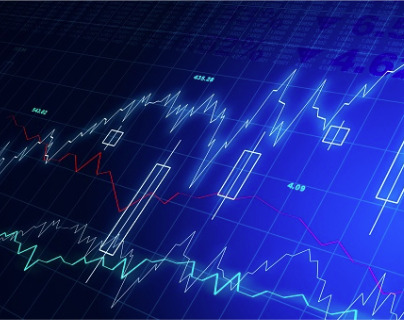 This article shows you why (with back tests) and exactly how (step by step) to implement the ERP5 investment strategy in your portfolio.

This is what you will learn:

A strategy that beats the Magic Formula

How is the ERP5 value calculated?

The strategy finds undervalued companies through the use of the following four ratios.

They named the strategy ERP5, based on the first letter of the 4 ratios.

To calculate the ERP5 ranking you simply rank each company against all the other companies based on all four ratios.

In the screener we group this combined ranking into percentiles (from 1 to 100), with 1 is the 1% of companies with the best ERP5 rank and 100 the worse ranked.

The ERP5 rank of more than 22,000 companies is available in the Quant Investing stock screener.

All calculations done for you

Don’t worry if this looks intimidating, the Quant Investing stock screener does all these calculations for you. You can find all the ERP5 investment ideas with a few mouse clicks.

Does the ERP5 investment strategy work?

Now we come to the most important question. Does the ERP5 investment strategy work?

As you can see companies with the lowest ERP5 values (the most undervalued companies), quintile 1 or Q1 in the above table, did a lot better than companies with a high ERP5 value, and did this for small, medium and large companies.

Substantially better than the market

Low value ERP5 companies all also substantially outperformed the market which returned only 30.54% over the same 12 year period.

This is how the above back test was done.

The back test universe was a part of companies in the Datastream database containing an average of about 1500 companies in the 17 country Eurozone market during our 12-year test period (13 June 1999 to 13 June 2011).

Each year all the portfolios were formed on 16 June. We chose 16 June as most European companies have a December year-end and by this date all their previous year-end results would be available in the database.

In order to test the effectiveness of a strategy, we divided our back test universe into five equal groups (quintiles). The 20% best ranked ERP5 of companies were put in the first quintile (Q1), the next in the second, and so on, with the 20 % of companies with the worst ERP5 ranking in the fifth quintile (Q5).

For the same 12 year period mentioned above we also tested the Magic Formula (applied to European companies), compared it to the ERP5 strategy and this is what we found:

The table shows the total 12 year return of both strategies with the last column showing by how much the ERP5 strategy beat the Magic Formula.

As you can see the ERP5 strategy, for all size companies, did substantially better than the Magic Formula, in fact for small companies if you would have had done nearly 200% better.

Here are more recent results of the returns you could have earned if you invested in the top 20% ERP5 companies world-wide.

As you can see the ERP5 investment strategy did not beat the Magic Formula the last few years but both strategies substantially beat the market!

This is how the ERP5 investment strategy performed in Europe:

Also in Europe the recent performance was slightly worse than the Magic Formula but both strategies, overall continued to outperform the market.

How to improve the returns of the ERP5 strategy - a lot!

We also tested the ERP5 strategy with 13 other ratios and as you can see in the table below the returns of the strategy can be substantially improved. 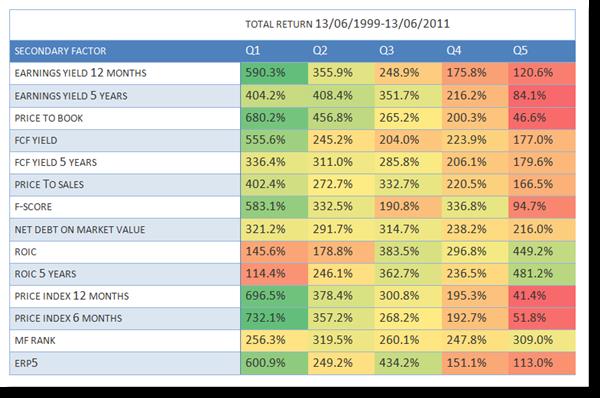 In the table the returns you should look at are those in column Q1. They show the returns generated by first selecting the 20% best ERP5 companies (most undervalued) and then sorting them by the items in the Secondary Factor column.

This means you could have earned the highest return of 732.1% over 12 years if you invested in the best ranked ERP5 companies that also had the highest 6 month price index (stock price momentum).

As you can see the ERP5 investment strategy is something that deserves your attention because as a stand-alone strategy it has performed substantially better, not only than the market, but also better than the Magic Formula.

How to implement the ERP5 investment strategy in your portfolio

Because all the calculations are already done for you in the stock screener it is VERY easy to implement the ERP5 investment strategy in your portfolio.

The following is just an example; you can of course combine this strategy with any of the more than 110 ratios and indicators in the screener.

If the ERP5 column is not showing here is how you can add it: How to create and edit Templates in the Quant Investing stock screener

You now have a list of companies that fits the ERP5 momentum investment strategy.

Click here to start using ERP5 in your portfolio NOW!

How to keep your losses low

We strongly recommend that you use a strategy to keep losses low. You can read more about that here: Truths about stop-losses that nobody wants to believe

Exact definition of all ratios – the glossary

You can read more about the ERP5 investment strategy in the following articles:

PS To find ERP5 investment ideas in the countries where you invest (for less than an inexpensive lunch for two) click here: Sign me up right now!

PPS It is so easy to get distracted why not sign up right now before it slips your mind?

Click here to start using ERP5 in your portfolio NOW!